Preparing For The Centennial Of A Place That Matters 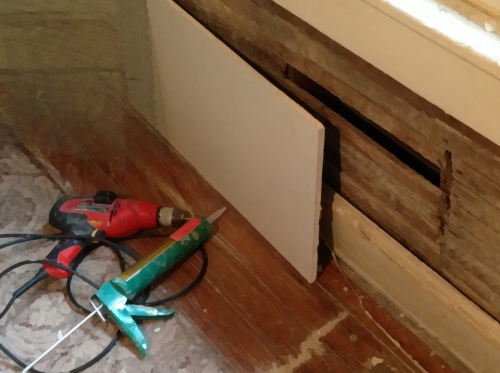 Over many years, there had been a good amount of water damage under most of the windows in my house. In some rooms like the bedrooms, damage had been covered by wood grain 1/4 inch paneling or plasterboard. In the dining room it had been covered over by wallpaper.

In these areas under the windows which are rather large (but won’t need to support pictures, etc.), I’ve used plasterboard which has a thickness close to the plaster on the walls. I used Liquid Nails adhesive and then regular drywall screws to attach the plasterboard to the existing lathe boards.

Some renovating homeowners in my neighborhood removed all lathe and plaster work and replaced it with sheetrock. For me, lathe and plaster walls seem to have a sturdier feel, even though they may look identical. I’ve only done total demolition and used sheetrock in the kitchen where it was necessary.

For some spot wall repairs here and there, I’ve been able to successfully use a tip that I picked up from a 1992 book by Martha Stewart titled “Martha Stewart’s New Old House.” For some repairs she suggested using wall plaster mesh (doubled if needed) and regular plaster of Paris.

My city’s library has many “vintage” (read “out-of-print”) books, and even though these may have only black and white photographs or less than perfect color photographs, their content is still detailed and valuable. They also are more realistic, without “quick and easy” or “remodel in a weekend” chapters.

This photograph was taken November 2012.