Preparing For The Centennial Of A Place That Matters

Please STOP! Read this first! (before rushing out to buy a ceiling medallion) 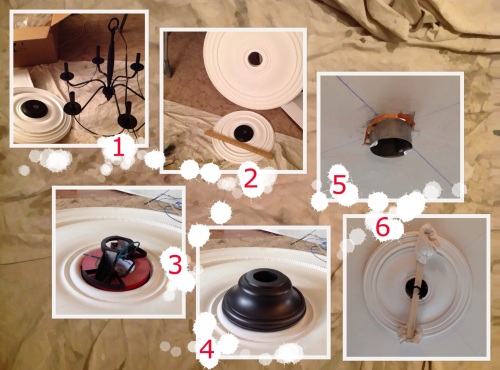 Since my last post about the ceiling medallions, I have learned a lot and also have been hoping that everyone following my blog did not go out immediately and buy ceiling medallions to install in their homes. If that was you, I want to say, ” Please STOP! Read this first!”

Although I had done a great deal of research on styles because I wanted to make sure that the medallion for the dining room and ceiling were the same style (just different sizes) to help them appear as being original to the house, I had done no research into the types of ceiling medallions. It was a shocker to me to find out that my ceiling fan could not be installed with my living room ceiling medallion as it was when it came out of the box. Modifications were going to be necessary in order to “make it work.”

While I was doing all of the planning for the modifications, I kept wondering, “What if all of the people following my blog go out and buy ceiling medallions before I am able to post how to solve this problem?!?” After all, these ceiling medallions really do look incredible! Why wouldn’t someone want one..or more!!!

But there is a problem with adapting a ceiling medallion designed to work with a chandelier to make it work with a fan that is the cause of my statement, “Please STOP! Read this first!”

Photograph 3 shows the living room ceiling medallion after the recessed portion has been cut out to allow for the electrical box to be lowered. The roll of red duct tape that you see here roughly matches the height and diameter of a metal electrical box. The black fan hanger bracket is resting on the red duct tape in roughly the same position that it will need to be when finally installed.

Photograph 4 shows the fan canopy in place over the fan hanger bracket. If you flip Photograph 3 and 4 upside down, you can see better how they will look once in place.

Photograph 5 shows the metal electrical box that has been secured to a vertical 1″ x 4″ board being lowered through the hole in the ceiling to its approximate final position.

Photograph 6 shows the black fan hanger bracket attached to the electrical box and a small board and protective old t-shirts being used to prevent damage to the ceiling medallion. Most of the directions that I read said to use nails or screws to hold the medallion in place while the adhesive dries, however I didn’t want the extra work of filling in the hole, and honestly my hammering skills are not that great, and upside down, they are close to non-existent!

There are other ways to do this, and if I needed to do this in another room, I would probably install the ceiling medallion first and then install the electrical box that had been bolted to the vertical 1″ x 4″ board after that. This would save a good deal of fiddling and adjusting while trying to hold up the ceiling medallion which tends to slide when the wet adhesive is applied. It also seems to get heavier the longer you hold it up! The small board and protective old t-shirts can still be used if another small board is used across the ceiling joists in the attic.

Now, go shopping for a ceiling medallion, and “make it work!”

These photographs were taken February 2013.

One Comment to “Please STOP! Read this first! (before rushing out to buy a ceiling medallion)”